A must-see attraction on Sado. Sado Gold Mine was ranked one of the world’s top 3 precious mineral mines along with ones in Potosi, Bolivia and Zacatecas, Mexico—both registered World Heritage areas—in the early 17th century. The business developed through multiple stages of engineering with emerged technologies over its nearly four-century operation until 1989 when operation discontinued. The total output of gold and silver reached 78 tons and 2,330 tons respectively, the largest production in the country (except newly-discovered and active Hishikari gold mine in Kagoshima). Sado Gold Mine is listed on the nation’s tentative list of World Heritage sites to be nominated to UNESCO. Sodayu tunnel, chiseled by hand in the early 17th century, and Doyu tunnel, opened up by machinery in the late 19th century, are available to the public. Admission: 900 yen each course; 1,400 yen combined for two tunnels. Other guided tours (in Japanese) of historic and industrial heritage courses are available. Contact us about costs and availability.

Mingei-kan An exhibition of classic collection of chests and artifacts

A century-old private house with owner’s antique collections is now open to the public. Sado’s history, culture, and traditions are seen in chests and other items. We also display the early development of Imari ceramics, which were brought to the island from Kyushu through the marine transportation of the 18th century. The entrance is inside of a family-run clothes shop.

See where the gold mining operation was governed from at this restored branch office building dating back to the era of the Tokugawa Shogunate (from 17th cientury to late 19 century). Skillful carpenters successfully restored the original construction.

Japan’s wood-cut block printing technics rapidly advanced in the late 17th century, when ukiyo-e images gained popularity throughout the country. In contemporary ages, various hand-made prints depicting people’s daily life on Sado are in display in the museum. These artwork activities were facilitated by a late local high school teacher. The building, formerly an old courthouse, serves as a quiet reminder of olden days.

Jishoro Bell House is found at the corner of the end of Kyomacchi-dori Street. The bell was cast in 1917 with Sado's copper. The house fell victim of fire but was rebuilt in 1834 and renovated in 1860. The bell is used to tell time to people in the area. The routine once disappeared in the early 19th century; however, the activity was recently revived by the locals. The bell is rung at 7:00am and 6:00pm (Apr to Oct) or 5:00pm (Nov to Mar). 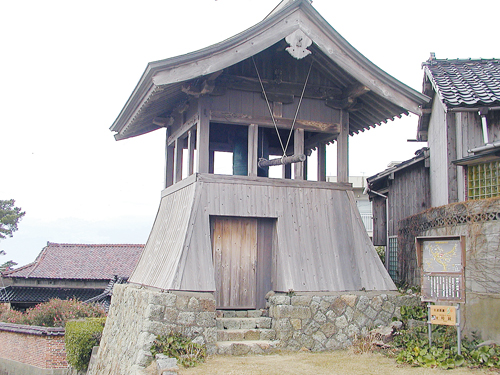 The museum exhibits historic materials from the Sado gold mine and its related artifacts. The Exhibit House offers hands-on experiences of artwork: try your own pottery work for 1600 yen, or traditional Sakiori weaving for 2400 yen. 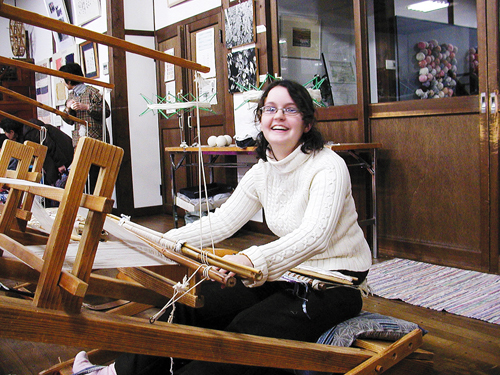 This old concrete structure is all that remains of what was a one time the largest processing plant of its kind in East Asia . The plant was originally designed to increase output of the mining operation, and its construction was completed in 1938. However, the production shifted to war supplies such as copper after WWII broke out in 1941. Unfortunately, excessive mining during the war period resulted in a large scale of downsizing and ultimately the plant shutdown in 1952. The brick building next to it is the remains of Sado's first coal-fired power plant intorudced in 1908. Admission free. 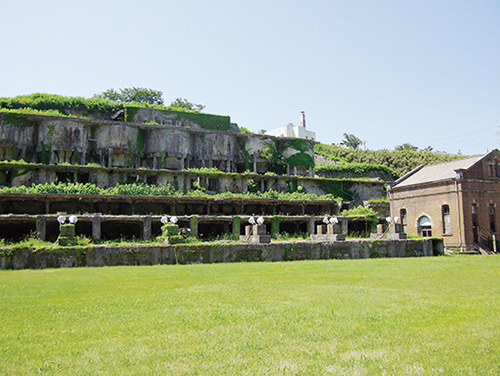 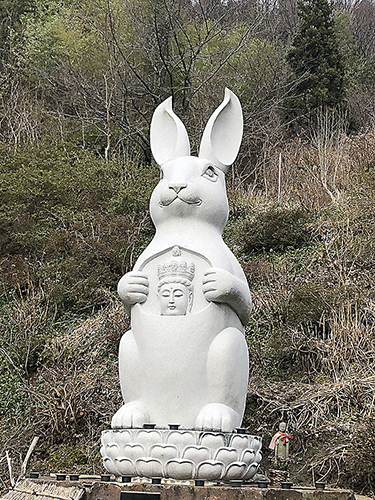 Chokokuji Update: Chokokuji Temple has stopped raising rabbits as of April 2021. Public health officials have stated that due to hygiene issues and the rabbits’ reproductive capacity, they must be neutered. However, this goes against the Buddhist philosophy of not disturbing living things. As a result, the master priest has decided to give up the rabbits altogether. The below is the old description.

An impressive 6m tall bunny statue—with an image of Kannon, the goddess of mercy, in its chest—watches over rabbits roaming free on the grounds. Those rabbits naturally help with weeds by grazing on temple’s grounds; various seasonal flowers grow there for medicine and food, meaning no herbicide is allowed. Visitors can play with the rabbits freely. The temple is also home to many local treasures, including a wooden statue of an 11-faced Kannon.

Seisui-ji Temple was built in 808 by Buddhist monk Ken'no, According to a local ledged, a child deity appeared and suggested to construct a temple when the monk stayed overnight here in 805. Meanwhile, Emperor Kammu (781-806) in Kyoto pitied many of the people for not being able to visit Kyoto's Kiyomizu-dera Temple. When the emperor heard this omen, he ordered to the monk to build Seisuiji Temple on Sado. The temple features a stage similar to the platform of Kiyomizu-dera Temple. While Kiyomizu is affliated with the hustle and bustle of Kyoto tourism, Seisui-ji's perpetual quietness makes for a peaceful visit. A lofty, tree-lined set of steps awaits your entry. Admission free. 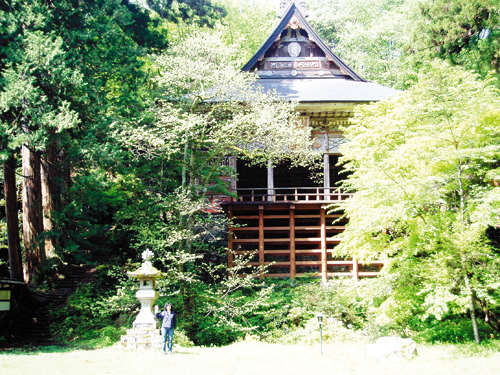 Konpon-ji is one of the sacred sites honoring the Buddhist priest Nichiren, the founder of Nichiren Buddhism, another major Japanese Buddhist stream. He was banished to Sado in 1271 for his criticism of the Kamakura shogunate government. During his stay on Sado, he wrote the Kaimokusho (The Opening of Eyes), one of his most important scriptures. Konpon-ji, meaning "fundamental". The temple was built in 1607 to commemorate his honor and history. Admission is 300 yen. 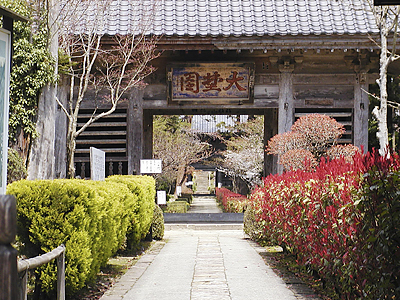 Myosen-ji Temple is said to have been built in 1278 by Endo Tamemori, a devout believer of Nichiren's philosophies. The temple was originally built at a different site but was moved to its present location in 1589. Its five-story pagoda tower was built in 1825 by two generations of carpenters and took 30 years to complete. Admission free. 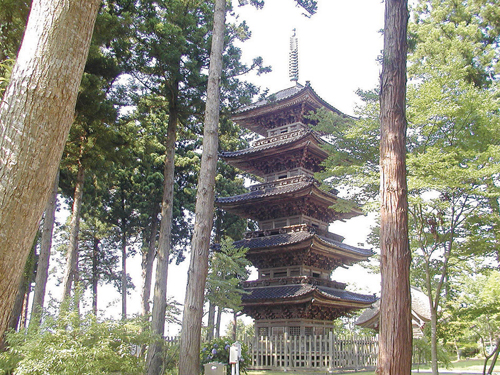 Unfortunately, this beautiful thatched-roof temple fell a victim to fire on December 6, 2021.

-The previous description- After Nichiren arrived on Sado (as described the above), he successfully won a number of converts, causing the Kamakura government to reevaluate his importance in Japanese society. The government thus relocated him to Ichino-sawa here in 1272, where he eventually received a pardon and returned to Kamakura in 1274. In the following year, Myosho-ji Temple was established by a follower who remained. The nearby Jissoji Temple is another site important to Nichiren, as it was the location where he would worship the rising sun daily. Admission free. 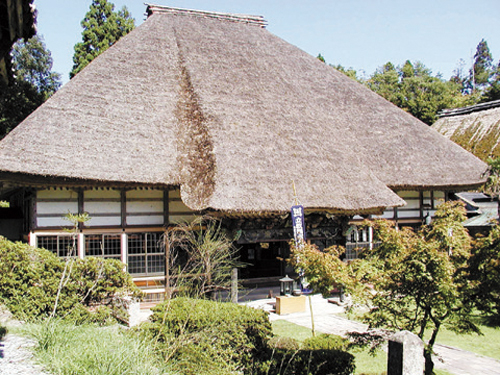 A jizo is a stone image of a guardian deity for children. The principal image kept here is said to protect children from illness and to help recovery. Many parents bring and leave jizo statues as these jizo undertake sufferings on these children's behalf. The number of jizo statues continues to rise. 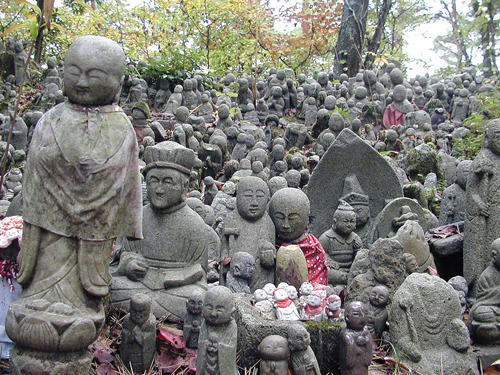 Rengebuji Temple is considered one of the three sacred temples (the other two are Kongobu-ji Temple in Wakayama and Murou-ji Temple in Nara) in esoteric Shingon Buddhism, one of major streams of Japanese Buddhism. Legend holds that the temple was built by Kukai, the founder of Shingon. However, there is no record of him ever having visited Sado. It is also said the 9th century Emperor Saga ordered Rengebu-ji's establishment on Sado for praying for the nation's peace as it is located in an unlucky direction from Kyoto's Imperial Palace. This temple maintains historically important architecture in each era, dating from the 14th. Free admission. 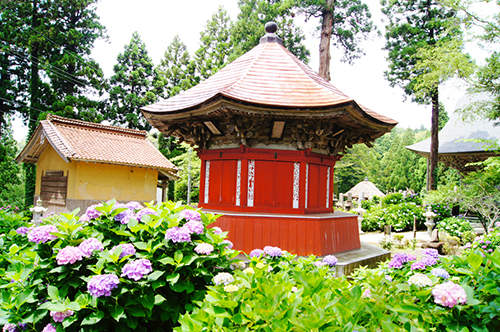 This museum exhibits a wealth of Sado's historic relics as well as a re-created sailing ship originally built in 1858. Many century-old household goods and tools are also on display in this old school building. In cave in a hidden hilltop, multiple deity images were carved on the wall inside the cave. Local people consider it a holy site. A legend says this narrow cave is said to go through to Iwaya-guchi, a northern part f the island. 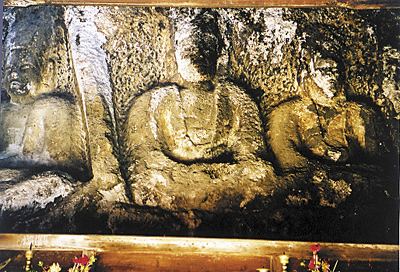 This entire area has been declared a national historic site. It was originally a village of skillful ship builders and owners when Ogi Port was one of the designated ports of call for Japan’s maritime transportation activities as well as a prime embarking port for Sado's gold between the 17th and mid 19th centuries. Multiple old houses open to the public (with a charge) preserve a vestige of prosperity and show visitors building technique of the times. Behind the small village, Shokoji Temple stands quietly, where all households in the area worship a guardian deity that is said to ensure navigational safety. In adhering to this practice, locals replace flowers at the temple before they wither or dry so that they appear to last forever. Visitors will be kindly asked to make a contribution of 100 yen for preserving the historic area. 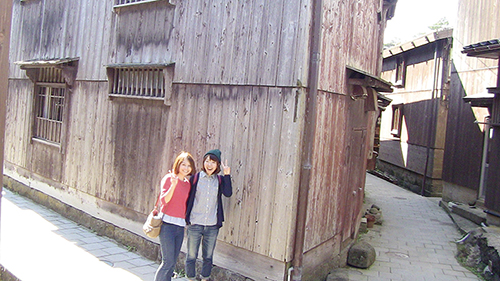 Sado Island Taiko Centre offers a hands-on learning experience in Japanese taiko for groups and individual visitors (from a 60min course ¥2,200, an advance reservation is needed). Please feel free to contact us for availability and detailed information. We are located close to Kodo Village, where the internationally renowned Japanese drum performing group Kodo is based. Enjoy beating taiko in our facility surrounded by the warmth of woods and splendid nature. Two large natural wooden taiko, which were made from a 600 year-old (estimated) keyaki tree, are in place in our hall. Walk-in visitors are also welcome.

This cave is found in the middle of the footpath between Ono-game and Futatsu-game (see Scenic Spots section). Hundreds of jizo statues are left by parents whose children died. A local folk tale says this place is where those children stop in on the way to heaven. These figurines ensure that children have a safe journey. The Monument for the Dakota Incident

This is the place where RAF (Royal Air Force) aircraft FL510, as a Dakota III or Sister Ann, crash-landed in January 1946, just 5 months after the end of WWII. All aboard the aircraft were safe. With warm hospitality for its crew members provided by local people the plane was successfully repaired and flown back into the skies. Based on this story, a Japanese film was produced in 2013. The title is “Tobe! Dakota.” (English title: FLY, DAKOTA, FLY!)
◎Theme Tune / ◎Trailer

In the past, the 1955 movie, The Night My Number Came Up, was created on the true story of Air Marshal Victor Goddard, one of the Dakota’s passengers. It tells the story of why the artifact came to Sado. However, the rest of the story, what happened after the crash-landing, was virtually unknown until recently. The  new movie revealed it to all viewers for the first time. 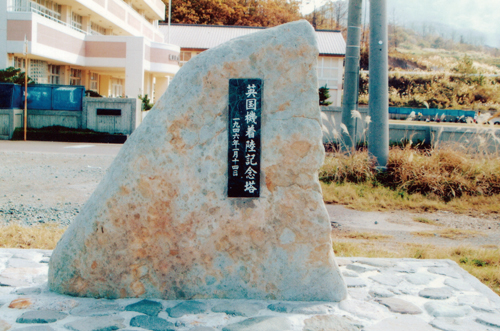 Sado Nishimikawa Gold Park is a place where visitors can enjoy gold panning as well as scientific exhibitions.  History of gold extraction on Sado dates back to this Nishimikawa Alluvial Gold as early as 12th century, although Sado’s gold and silver mines are often represented by the open-cut (hard-rock) and underground mining at Sado Gold Mine in Aikawa, whose development began in the early 17th century. Try panning for gold. Practice makes perfect as they say. You will get gold or we will make you get gold. 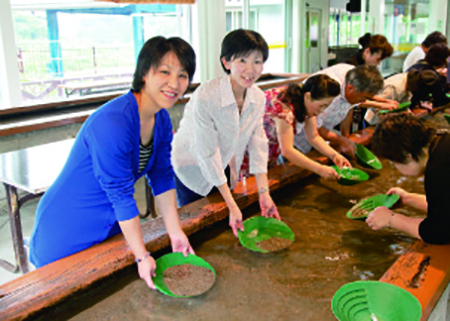 The Remaining Structure of Oma Port

The construction of Oma Port was completed in 1892 to facilitate unloading supplies and coal for Sado's gold mining business, and was actively used until the middle of the 20th century. A stretch of embankment consists to natural stones filled with hard-packed clay and slaked lime, making water-tight stone pitching layers to provide strong resistance against pounding waves. This Tataki embankment structure was a significant civil engineering achievement at the time without using concrete materials that were at unaffordable prices. The same embankment structure prevailed across the country during the 19th century. However, most of them were modernized and now long gone. Oma Port is one of few treasured places that still retain the original formation. 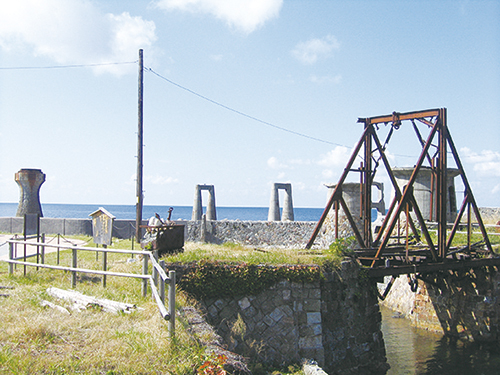