Enjoy sea kayaking on Sado Island. Visitors can paddle the kayak along Sado’s beautiful coastal line with clear water and natural rock formations. Two-seater kayak tours take 3hours. No need to worry about it for those who have no experience of doing this. Participants will practice padding at the nearby shallow water before going to the course with qualified instructors. Kayakers will enjoy clear water and see the magnificent Earth’s formation which took place millions years ago. Two course programs are available from April to October daily. Courses are determined based on the weather condition on the day. Advance reservations are required at least one day before the desired kayaking day. Hands-on diving experiences are also available. Sea kayaking ¥5,400 (a tax included), hands-on diving ¥13,000 (a tax included) https://www.visitsado.com/en/spot/detail0040/

Seasonal
Daily from April to October

Observe Sado’s natural cedar trees which have long been preserved in areas at an altitude of about 900m. The weather- beaten shapes formed over hundreds of years give human beings a strong message of how magnificent nature is. The Sado Tourism Association offers various guided (in Japanese) eco-tours to precious locations including primitive forests. For more information, call 0259- 27-5000 or write to: info@visitsado.com

Become one with nature. See unspoiled alpine flowers as you explore during the blooming season. Preservation of natural habitats is important to us: please mind your manners and respect the environment. Sado Trekking Map (Japanese) is available at Ryotsu Tourist Information Office. Various alpine plants are in flower from late April to early June. Also, the Sado Tourism Association offers various guided (in Japanese) eco-tours to precious locations including primitive forests (restricted preserved areas without a guide). For more information, call 0259-27-5000 or write to: info@visitsado.com

A playful way to pass the time aboard the Sado Kisen ferry: get some snack chips or crackers and head to the stern. You will see many sea-going birds chasing the ferry and your treat all the way across the Sado Strait. If you have luck, you may see a pod of dolphins from the deck.

Sado Island is the only island where visitors have a chance of seeing toki, or the wild Japanese crested ibis. This is mainly because the local people practice biodiversity in farming, meaning they use fewer agrochemicals. Doing so helps secure feeding grounds that arise through the coexistence of human beings and nature. The methods were praised by FAO in 2011 and were added to its list of Globally Important Agricultural Heritage Systems (GIAHS). (Also see United Nations University.) The native born ibis once went extinct in 2003 – however, artificial breeding using identical species donated by China has led to a dramatic revival, and the birds have been reintroduced back to Sado’s skies every year since 2008. While the number of the resident birds identified is now over 420 as of early 2020, the species is still considered critically endangered. If you happen to see toki flying over the fields, please stay silent and remain inside the vehicle so as not to scare them. Visitors can also observe them up close in the Toki Forest Park (Toki-no-mori Koen), where artificial breeding is conducted and healthy candidates are chosen to be released. Related News: The Japan Times (June 14, 2016)

Closed Mon
(When a holiday falls on Mon, open and closed the following day)

According to numerous old legends on Sado Island, raccoon dogs often disguised themselves as human beings and occasionally helped people in hardship. Their prominence may be due to the lack of foxes on Sado, the traditional trickster animals of Japanese lore. Some still believe that the raccoon dog is an incarnation of the divine—God blesses you if you happen to see one during your stay. There is no wild foxes, bears, deer, bores or monkeys on the island by the way.

Sado is well known for its brilliant clear water and its diving is among the best in Japan. Its water has unique features that are not seen in the Pacific side of Japan. Free transportation services are available: from Ryotsu Port or Ogi Port to diving locations and your accommodation. Hands-on experience for the unlicensed ¥14,500 (includes necessary equipment, just bring your own regular swim wear); Two boat dives for the licensed ¥14,500 (excludes regulators, other equipment and your swimsuit). A member of PADI. Diving is available all year around. Note: All divers are asked to sign Liability Release and Express Assumption of Risk before diving. http://niigata-freeway.jimdo.com/ (JP text) 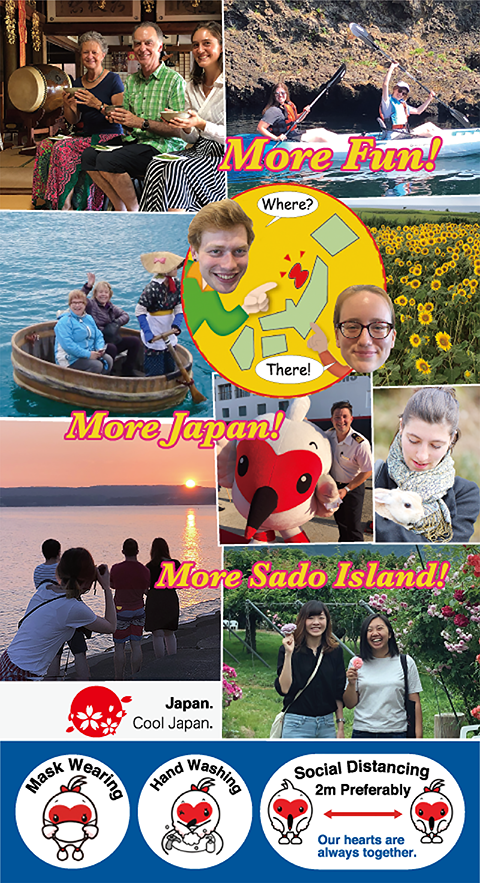